In 1983 I visited Malta and Gozo for the first time. During my stay on Gozo I heard of cart ruts which exist on the island. No one could tell me exactly what cart ruts are and where to find them. From then on, I became more and more intrigued by this topic with every step I took on the island.

In 1985 I found out that there are cart ruts on the Ta’Ċenċ plateau. I had no idea what the tracks looked like, nor did I find any literature on the subject. My interest was now finally artoused and I decided to make my way up to the plateau to conduct further investigations. I had been on the plateau many times before I finally found the intersection of two pairs in 1999.

Many years later I decided to search for and map all the existing cart ruts, because I realized that hardly anyone knew anything about the cart ruts and their locations. Further study of the literature showed, that the coordinates used in books, published until that time, were not accurate. For this reason I used Google Earth™ as a research tool in order to find other cart ruts.

In October 2015 I started my project of mapping and cataloguing all still existing cart ruts on Malta and Gozo. So far I already have 701 in Malta and 43 pairs in Gozo on my list. 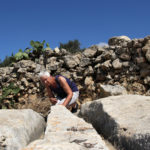 ish is that the population of Malta and Gozo will learn more about the cart ruts and what they mean to their heritage. I hope this will make the population aware of them and hopefully prevent these areas from being destroyed any further with waste, demolition debris, concrete, buildings and parked cars.